This brief tutorial introduces the foundational elements of visual communication. The emphasis is on techniques to graphically communicate (A) hierarchy, (B) grouping and (C) sequence— three concepts that are critical for designing effective figures, posters, and slides.

Here is an overview of the strategy: Position, color, size, shape, and orientation are variables applied to individual graphic elements. Graphic elements are the units of information that go into making a figure, slide, or poster. These include photos, icons, paragraphs of text, and titles. Next, the graphic elements are combined into compositions where contrast, repetition, proximity, and alignment, defined below, are created. (To learn more about these principles, see The Non-Designer’s Design Book, by Robin Williams.) A figure, poster, or slide is a composition of individual graphic elements.

Contrast: Elements have noticeably different visual characteristics then others in the composition. Created using the variables of color, size, shape, orientation.

Alignment: Elements have been arranged to create an imaginary line within the composition. Uses the variable of position.

Proximity: Elements are close together within the space of a composition. Uses the variable of position. 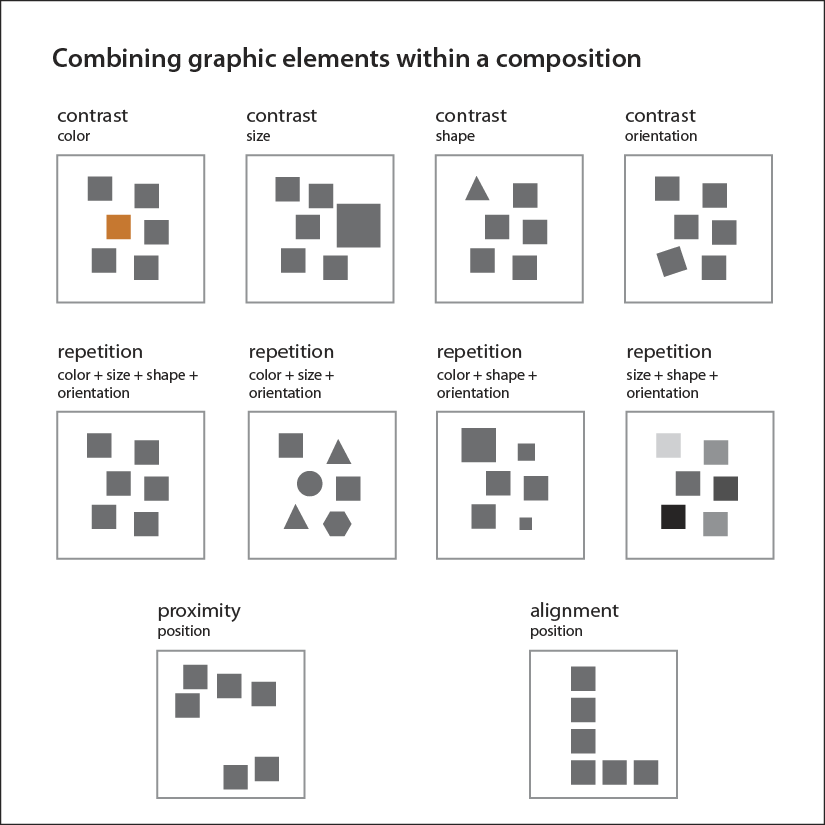 By wisely using visual variables and creating contrast, repetition, alignment, and proximity within the composition, you can communicate to the viewer the relationships among the elements of your composition. Clearly establishing hierarchy, grouping, and sequence through visual methods allows the viewer to quickly understand how the pieces of information in your figure, slide, or poster relate to each other—and therefore to more quickly understand the information itself.

Hierarchy: A dominant-subordinate relationship among elements.

Grouping: A relationship that specifies the elements to be associated together.

Sequence: A relationship among elements that specifies first, second, third…

As you examine the examples in the figure below, consider which of the compositions would communicate differently if it was turned on its side or upside down. In the top row (the four compositions demonstrating hierarchy), the first three compositions could be turned without changing what is communicated. But the fourth could not because it relies on the variable of position to communicate hierarchy. Using position as a way to communicate hierarchy works because we associate dominance in a hierarchy with the physical position of being “above” or “at the top”. Similarly, how we interpret a sequence (demonstrated in the last row) relies on position, following convention of reading English from left-to-right and top-to-bottom. First, identify all the uses of alignment. Which of these alignments simply serve to give the poster a tidy appearance, and which have a role in helping to communicate the information in the poster?

I chose to use two fonts are used in the flyer (Trajan Pro toward the top, Gill Sans at the bottom). Where is contrast used in the typography? Where is repetition used? What purposes do they serve?

Next, describe how hierarchy, grouping, and sequence were created within the flyer: Finally, here are some tips to help you avoid common mistakes in your designs: